So, I fucked up. As is my wont. Regular readers will know that fucking up is something that I feel I have a special knack for – though I’m also aware that I probably fuck up just as much as the rest of the population, but just *feel* it more – or even just that I think I do.

Anyway, it was a super-minor fuck-up, simply leaving something on the bus – but it dropped me into that temporary fuck-up fugue state. You know the one where you just feel like being quiet and sleepy and reading poetry and drinking cocoa and listening to the rain on a tin roof?

Except this time, I had all that and I wanted to play Shadowrun Returns. 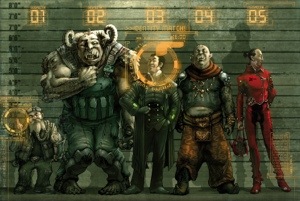 Now Shadowrun Returns, for those not in the know, is an old-style roleplaying video game, converted from an old-style roleplaying game. It’s a perfect simulacrum of Planescape / Baldur’s Gate / Fallout. It just ticks all the boxes that my sad brain wants – an escape route from a stupid world, to one where I have control over my decisions, where I can load after fuck-ups so that they never happened, and where I can decide the sort of character I want to be and how I develop rather than putting up with the outgrowths of damned determinism.

Except that in the game, there’s Better Than Life. It’s a life simulation that’s literally better than life, like In Philip K Dick stories like We Can Remember It For You Wholesale (aka Total Recall). And because it’s better than life, no-one wants to give it up – it’s horribly psychologically addictive, partially because it allows slum-dwellers of the future to escape their grim reality, partially for the reasons that all computer games are addictive, because they’ve dopamine-stimulator factories par excellence.

Because that’s the thing. Going into Shadowrun doesn’t fix my fuck-up. It doesn’t solve my problems. It doesn’t make them go away when I get out of the game. It just puts them off, and gives your brain a chance to relax – but not to understand, learn, or change.

When Shadowrun was first created, as a tabletop roleplaying game, computer game addiction was a cyberpunk trope, like mobile phones and international computer networks, that sounded cool but probably would never happen, like the predictions of 50s sci-fi writers mostly didn’t happen.

Yet nowadays, with cybercafe deaths and Candy Crush as superb signs of the current state of addiction, BTL seems almost parochial as an SFF prediction, too normal for comment. What, yes, we might get to the point where evil game developers are manipulating people to spend all their time and money in games? That’s happened. And that, to me, is slightly terrifying.