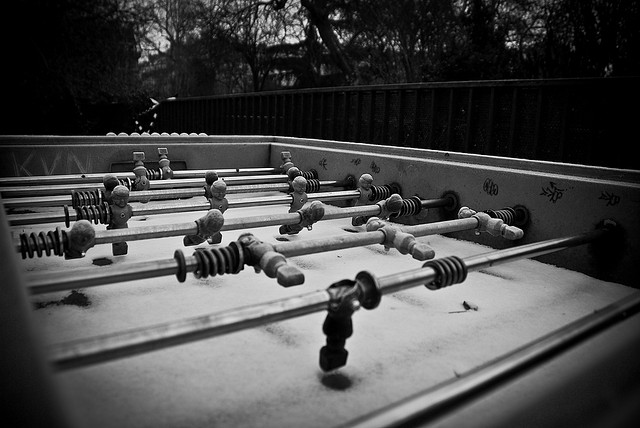 It’s been a while. Back at university, we were the scourge of the common room – by which I mean that we were good for beating people and not much else. And even that only at table football.

There was a core of around eight in our year. The socially-awkward, those tempted by easy victories of skill over victories of communication in a university that selected for communicators. For me, the large ceiling of the old bar felt like a goldfish bowl, a panopticon, from every point of which my embarassed hairy head could be observed, wincing, at all that potential observation. It also tended to be heaving, which meant if you were shy, the other two rooms were better.

One of those rooms was effectively a dining room, attached to the bar’s caff, where those daunted by the formality of the 17th century wood-panelled hall and canteen food could buy slightly more expensive expensive and healthier fare. The other was the games room, dominated by a pool table, a pinball machine, a puzzle-bobble machine, the table football table, and in later times a Gauntlet 2 machine that absorbed the donations of the millionaire’s child who’d pay for people to play with him.

I’d better emphasise; these rooms in the old bar were parts of the old kitchen, so were built out of chunks of stone coated in seven centuries of paint. After all this time and an aeon of settling, they’d achieved the consistency of a cave wall, with carved names obliterated by paint, paint, paint. They filmed Shadowlands here, as dusty-framed photos told you, and it was here that the college’s alumni would stumble up – short, bald men like Hislop and Hague, who’d buy drinks galore according to their strictly-political generosity.

But I passed over that table football table with undue haste. That’s the point of this tale and where we spent our days and nights. In the daytime, there might be a lonesome man practising or a couple of interloper tourists spinning the little men sick with enthusiasm and yelps. But, given its format – 2v2 – and three academic years of appreciative competitors, it was rarely empty in the evenings.

The key thing about Babyfoot, like any sport, was to recognise your talents and deficiencies – to recognise your place in the hierarchy of things. We had two recognised front men – Mark and Tom – and two definite defenders – Paul, Ben. Unreliable Toby and icy Terence could play any spot. There were others – midfield Martin, big-handed Ben2 – but they were distinct fill-ins.

Each had their talents. Ben was the impenetrable king of defence. Paul was as reliable as Ben, but could skeet curling shots straight from his right-back into goal. I could play any position, passably. Mark could knock the ball about nicely, but mostly only at 90 degree angles – he was lethal against newcomers, frustrated against others.

But Tom… Tom was sugar, spice and all things nice. His midfield was solid – and a good midfield in babyfoot is hard to bypass, given the density of players in that area. I often just vibrated my midfield so that, even if the ball got through, its route was lost – what you’d call playing interference in football proper.

But his whole game spoke culture. He had a uniquely variable speed. He seemed to know just when to roll a pass around the outside of his opponent’s winger, and when to just power one straight through to his attackers.

Once it was with the three strikers, defending became a matter of reactions and odds. When you’re defending normally, you tend to align your goalie and two defenders in a small range of configurations, normally doubling one defender up with a goalie, to reduce the range of angles available to an attacker, even to the degree which you tilt his monopod away or towards the attacker. A good defensive player can place his goalie and defenders in such a way that it’s impossible to score directly from any player who’s trapped the ball.

The first effective counter to a good defender was the crossover. Mark and I could do this to some degree. This was simply to line up a shot with one attacker and to then pass it sideways to the opposite one, before knocking it in. However, a good defender learned to switch rapidly between the two, the way he would when a long-range shot came in. This way you’d effectively cover both corners, effectively two thirds of the goal, with the middle covered during the transition.

So both Mark, Ben and I effectively learned the next step, which was to learn how to hit the ball at an angle from a side-striker, so that it slipped between the defender and goalie – but this, too, could be defended against, though it featured an uncomfortable-feeling crossover, which could be exploited by a canny crossover. We also learned to do the angle shot after a crossover, but it was unreliable as anything – more often the ball would bounce off a corner into a defender’s possession.

What Tom had was that culture, that reliability. Mark and I, as we got lubricated and frustrated, would get less subtle, slamming the ball into defenders, until we lost it, favouring power over finesse. (Toby would do that from the word go). But Tom never got angry, could always mix up his game, and the ball would always seem to do what he told it. Sharp angles, cross-overs, cut-backs, even rolling the ball one way and sending it the other, like a step-over in real football. A defender never knew what he’d pull out next, which made it a tough old game until you could hack the ball upfield, past his meticulously placed midfield.

In real life, Tom was a slow, unfit footballer (though I was no better), but he practised one thing until he was perfect at it, as he showed me one day. We were taking penalties and he was scoring every single one – the same way. He would just run up and pound it straight into the bottom corner. Even if the keeper knew it was coming, it was hard to defend against unless you were a semi-professional, especially as he’d mix up the corners. That was the mentality with which he approached all things – finding the weak point and practising it. That’s probably why he’s a lawyer now.

Now, it’s 13 years on, and the rump of that team is meeting up again, explicitly for a game of Babyfoot. I have no idea how we’ve changed – we’re bankers, programmers, lawyers and a journalist now – but I’m dying to see Tom’s elegant knockback one more time.

I arrive early, start drinking by myself, write up our histories. We’re meeting at Bar Kick, one of two table-football centric sister establishments run in London’s centre. In the late afternoon, it’s already full. The longer I stay, the more full it gets.

And it’s men. At most, one in ten people here are women. There’s a joyous couple of girls next to me drinking long cocktails, a barmaid, and the occasional girlfriend on her phone, but it’s a manly environment, and a certain type of man too.

“Do you… have anything but lager?” I ask the barman. He almost giggles, and points out a single stout amidst the long list of clear, hoppy mittel-Europe beers. I ask for a pint. He says they only do bottles. I go for the cheap happy hour Spanish lager. It’s *these* sort of men.

An hour later. Two. It smells of sour, cheap hot dogs now and the atmosphere is full of raucous, plummy voices. The music is Johnny Cash, spanish guitars, The Big Bopper. I drink alone and wait.

(Much later, when the crowd has cleared a little, predatory packs of women enter the place. I guess if you want a nerdy lager drinker, this is the Shoreditch place to come.)

Eventually, half an hour late, they start sloping in. Mark is first, his face tucked into a sports top. He looks skeptically around the room with the same furrowed brow I remember from childhood. We talk banking. The others arrive one by one, until we have a quorum – we really don’t want to play until that point. Tom is absent.

We start. Mark is dominant. His angle control is better than ten years before. Toby is as random as ever, but solid in defence. Terence is more flakey than before, leaving his defence open when he shouldn’t, seemingly forgetting his left hand exists, but shooting from defence well and controlling his midfield superbly. Me, I’m still good in attack or defence, but the midfield on my left hand is too open – I have to start moving them constantly just to be disruptive to through balls.

In attack, Mark is relentless. In defence, indomitable. More than anyone else, he shows his enthusiasm and aggression. Soon, he’s literally jumping with excitement every time he smacks the ball. He bumps into his squash partner Jerome (draw whatever you wish from the fact we have squash partners now), who joins us, playing a frenetic, loose-handed version of the game, faster than he is actually capable of keeping up with, but faster than most people are used to. I can handle it in defence, but Toby has problems in midfield and attack.

Tom finally arrives, and we put him on with Toby, opposite Jerome and Mark. He’s shaky – it’s obviously been ten years since he’s played properly and he goes nine goals down with Toby (unreliably ambitious in defence). For the final goal, there’s a flash of the old flair, a little roll around the ball, and he scores. It’s good to see. I think I’ll stop writing this there. Before you or I know whether my hero is dead. Before you know if he’s lost it.